At the recent World Summit on the Information Society (WSIS) Forum in Geneva, I had the opportunity to take the audience on a journey on how to address the three biggest global existential threats: climate change, nuclear threat, and unsafe exponential technologies (AI, bio-tech, etc.). This blog focuses on climate emergency.

In 2015 the UN member states adopted both The Paris Agreement on climate change and Agenda 2030 with its 17 UN SDGs (United Nations Sustainable Development Goals). The SDGs are aspirational, transformational goals that are grounded in the Universal Human Rights and aim to create “a world of universal respect for human rights and human dignity, the rule of law, justice, equality and non-discrimination”. However, there are deep inherent contradictions within these goals where there is the risk of pursuing one favorite goal at the expense of the others. For example, goal 1 “No Poverty,” targets the elimination of poverty. However, if we continue to lift people out of poverty by burning fossil fuels such as coal while disregarding the environment, it will be impossible to reach goal 13, “Climate Action”. But there is a better way. In Geneva Dr. Bozesan presented a scientifically sound pathway on how it is still possible to implement the 17 UN SDGs within the Planetary Boundaries.

The Planetary Boundaries (PB) were introduced in 2009 by the scientific community to define a safe operating system for sustainable development. These nine factors regulate the stability of the earth system and include for example biosphere integrity, freshwater use, ocean acidification, ozone depletion, and climate change. We must stay within the green and yellow boundary, and we must not cross the red circle because that would lead us into the red zone which could have irreversible consequences to life on earth.

The question is: how could a pathway to achieving the UN SDGs within Planetary Boundaries by 2050 and beyond look like?

Prof. Dr. Rockstroem and Prof. Dr. Randers tested several scenarios which show the different pathways – and consequences – for humanity. They identified four different pathways and represented them in a graphic.  Having the 9 PB (Planetary Boundaries) on the vertical axis and the number of implemented UN SDGs on the horizontal axis, the goal is to be higher up within the green to fulfil more of the UN SDGs and to stay within the Planetary Boundaries at the same time.

All the pathways start at the same point: the trajectory taken by the world since 1980 when the world was not necessarily fulfilling many of the SDGs, but it was still operating within the green Planetary Boundaries.

One possible scenario for the future is that we continue the SAME way with Business as Usual (first pathway, red arrow) lifting millions of people out of poverty at the expense of Planetary Boundaries. If we continue with 20th-century politics and economics in the 21stcentury, we will be able to deliver a few more of the SDGs, but the price we pay is the stability of Mother Earth systems with terrible consequences for humanity. These are severe global warming, costly weather events, and social instability. Moreover, increased political insecurity with raising nationalism, growing inequality, and social unrest.

What would happen if we moved FASTER (second pathway, orange arrow) on delivering the SDGs and TRIPPLE the world economy by 2050? With 1% GDP growth per person until 2050, we could deliver insignificantly more on the SDGs, but we would risk to significantly destabilize the planet.

What if we tried even HARDER (third pathway, yellow arrow) and increased our ability to deliver on our promises by 30 percent across ALL sectors of society from climate to trade agreements? That would be very discouraging because we would still not get out of the danger zone with Planetary Boundaries and we would deliver disappointing results on the SDGs.

But, there is a SMARTER scenario (fourth pathway) that could solve the problem by 2050. Based on 100.000 data points, research data, and real-world experience over the past 50 years, scientists identified 5 Transformational Policies that could get us there. These are:

IF NOT US WHO? IF NOT NOW WHEN?

The Investment Turnaround is our Moonshot

Transformation is feasible. How to achieve the Sustainable Development Goals within Planetary Boundaries (A report to the Club of Rome)

“The Elephant in the Room and the Hidden Dimensions of Transformation” presentation by Dr. Mariana Bozesan 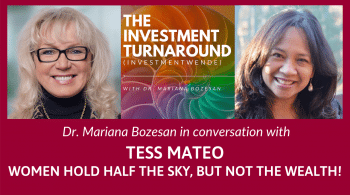 On Atheism, the Future of Capital, and Safe AI 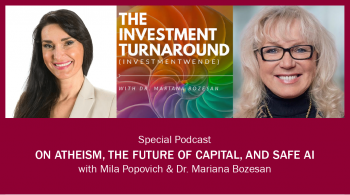 On Atheism, the Future of Capital, and Safe AI

How Lack of Fulfillment Drives Transformation 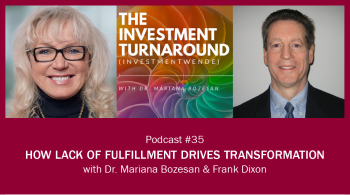 How Lack of Fulfillment Drives Transformation 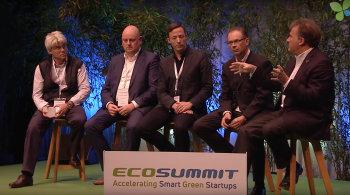